The Lion, the Donkey and the Fox 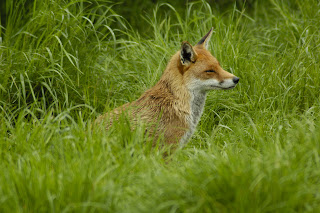 I just heard this story:

~~~~~~~~~~~~~
There was a lion, a donkey, and a fox that went rabbit hunting one day. At the end of the day, they came together and there was a big pile of rabbits in front of them. The lion said to the donkey, "Why don't you divide the rabbits fairly among us." So the donkey made three nice piles of rabbits at which point the lion killed the donkey, ate part of him, and threw what was left on the pile of rabbits.

Turning to the fox, the lion said, "Why don't you take the rabbits and divide them fairly between the two of us." The fox made a big pile in front of the lion and took one scrawny rabbit for himself. The lion asked, "Where did you learn to count so well?" To which the fox said, "I learned from the donkey!"

P.S. If you haven't read my book, "You Don't Have to Learn Everything the Hard Way--What I Wish Someone had Told Me" go ahead and click the link to the right with the picture of the cover to learn more!

Photo from Morguefile.com, by monosodium, thank you!
Posted by Laya at Sunday, March 18, 2007

Email ThisBlogThis!Share to TwitterShare to FacebookShare to Pinterest
Labels: Learning from other people's experiences, story

Laya
I love to connect with people and make a positive difference in this world. No one gets a life without challenges. Some people seem to have more than their fair share. It’s my mission to ease the way for who ever I can. So, I wrote a book titled "You Don't Have to Learn Everything the Hard Way--What I Wish Someone Had Told Me." It’s the book I wish someone had written for me when I was searching as a teen, because I learned way too much “the hard way.” If you're interested you can read some of that on my website (check out the links below) or on the book's page on Amazon.com. (If you click on 'surprise me' it will get you to other places in the book if you want to read more.) I love being married and I love being a mom. I love my dog and cat and chickens. If you search around the blog, I've got photos of my dog and cat posted. There's more than one dog and cat here though. Hint: my dog and cat are have the same color fur. :-) Enjoy! Aunt Laya