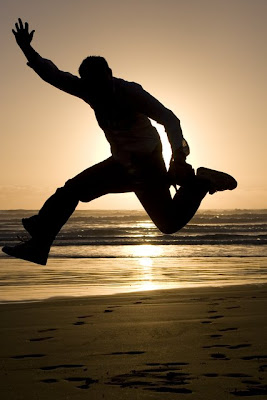 Once I was working on a movie set with a famous actress/model. Just before the camera started rolling, she started to scream and stomp about. Everyone on the set thought she had lost her mind. As suddenly as she started, she stopped and looked around smiling. She explained that she learned that if some place inside she felt foolish about a scene, she should really "act" foolish so that the scene would feel normal to her.

What ever the reasons are we sometimes give in to fear of going for our dreams. I don't think it's always important to know why. It's OK to skip the why and simply get to the how.

There are different kinds of fear.
Sometimes it's good to be afraid. We're supposed to be afraid to run in front of a speeding train. It's wise to wait until the train is past before we cross the tracks. It's good for a woman to have some fear about walking alone in a parking lot at night. Bad things happen too often and it's wise to ask a man (or for a man to offer) to walk a woman to her car at night. It's good to be afraid of going to jail. It may be better to do what's right just because it's right, but it's also good to understand that some actions have a negative consequence and to be afraid of that is healthy.

Sometimes fear is debilitating. Fear can be so deep and wide that the person who is feeling it can not leave their home. This is not healthy fear. It is a kind of fear that can be treated though help may be needed. Some people are so afraid of flying that they will not leave their home town. That's not a big deal if it's not stopping the person from his normal life. It's sad if he has can not go to the award presentation for his good work because of his fear.

Then there is the kind of fear that doesn't look like such a big deal. I mean, you're living your life just fine, right? Yet, there are fears that stand in the way of doing, being, or accomplishing something that would make your heart sing.

This is fear that you can conquer!

The power of imagination

The truth is, fear is mostly imagined. One of my many favorite quotes is by Mark Twain:
"I am an old man and have known a great many troubles,
but most of them never happened." ~Mark Twain
Courageous people are not those without fear, they move in spite of their fear.

You know this is true. Think about something you were very fearful about that in the end worked out just fine. You already have life experience with this, but maybe you don't give yourself credit. Were you afraid the first day at a new job, but now you love it? Were you afraid the first day of a new school, but you made friends and got through it? Did you remember the first time you got on a bus or train or airplane alone?

Have you ever tried to do something and the thing failed? Maybe you felt bad for a time, but then if you think about it, don't you feel great that you gave it a try? Did you learn something? Did you turn your learning into a stepping stone?

Think about the times when you have accomplished the thing you felt fearful about. Remember and hold onto the feeling of accomplishment when you succeeded. Imagine that same great feeling right now and in the future.

You can do this.
Email me your wins, I love hearing from you.

with gratitude to FlyingPete and morguefile.com for the amazing photo!
Posted by Laya at Tuesday, September 23, 2008

Laya
I love to connect with people and make a positive difference in this world. No one gets a life without challenges. Some people seem to have more than their fair share. It’s my mission to ease the way for who ever I can. So, I wrote a book titled "You Don't Have to Learn Everything the Hard Way--What I Wish Someone Had Told Me." It’s the book I wish someone had written for me when I was searching as a teen, because I learned way too much “the hard way.” If you're interested you can read some of that on my website (check out the links below) or on the book's page on Amazon.com. (If you click on 'surprise me' it will get you to other places in the book if you want to read more.) I love being married and I love being a mom. I love my dog and cat and chickens. If you search around the blog, I've got photos of my dog and cat posted. There's more than one dog and cat here though. Hint: my dog and cat are have the same color fur. :-) Enjoy! Aunt Laya